Home The Scope of IF: What Game Deserves the Name?

The Scope of IF: What Game Deserves the Name? This guest post is brought by Hap Aziz. You can find more from him on his website.

a tale of two formats

Perhaps there’s some significance that as we approach the 40th year since Will Crowther first developed the text version of his Colossal Cave Adventure, the game community finds itself engaged in a serious re-examination of the Interactive Fiction (IF) genre and what kinds of games should actually be considered to be IF. On one hand, we have purists who insist and a fairly strict adherence to the text-only, parser-based format. I’ll admit that this particular definition appeals to me since I’ve been playing IF since 1980. It gives me comfort. Yet there are the proponents of the big-tent approach: make the genre more accessible by broadening the definition of IF to include more hypertext or point-and-click kinds of interfaces.

As a foundation for this discussion, let’s consider the definition of classical IF as being text-based description in prose format to which the game player may respond (at a prompt or cursor) in short text phrases or even simple sentences. The following image from the game Zork I is an example, readily found in playable format on the web. 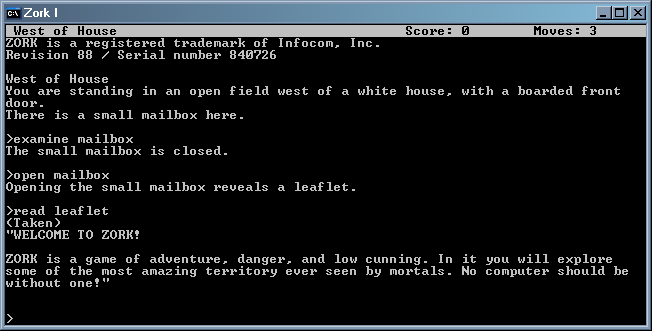 Back in the late 1980s (considered to be the heyday of IF), the lines of distinction were drawn between parser-based IF and hypertext games. In his book Hypertext Meets Interactive Action: New Vistas in Creative Writing, Gordon Howell lists the differences, and a few years later, authorities in IF such as Nick Montfort and others go into a good level of detail about those differences. Essentially, computer hypertext can be considered a form of the Choose Your Own Adventure (CYOA) stories in which the reader makes a selection out of possible actions and then progresses in the book to the designated page. The modern debate really boils down to whether or not CYOA stories should be considered Interactive Fiction

What the community thinks

To gain a little insight into the thinking of the game-playing community, I ran a casual survey of gamers familiar with the IF genre. In some ways, the findings surprised me, especially in terms of the self-identified IF “traditionalists” position on the topic. There were a total of 34 respondents, and their first encounters with Interactive Fiction ranged from 1977 to as recently as 2013 as a newly-minted IF gamer. So there were old-timers along with some real newbies. When asked the question regarding which format (parser-based or CYOA) they considered to fall under the definition of IF, nearly all listed both types. It appears “older” IF gamers were not more likely to lean toward parser IF as being more valid than CYOA. All respondents had played both types, and it’s interesting to note that everyone’s first time playing was with the traditional parser-based format.

However, when asked which format of IF would they recommend to first-time IF players, nearly 70 percent answered they would suggest the CYOA format as opposed to 20 percent that answered parser-based IF. Several of the survey responses indicated that it comes down to a matter of accessibility and ease of gameplay. Further, an overwhelming majority of respondents (80 percent versus 3 percent) answered that multimedia elements in addition to pure text should be included in IF games, further demonstrating the break from the idea that the IF format should be limited to a text-only experience. As a long-time player of IF, I’ll admit that really surprised me!

While it’s difficult to generalize across the larger IF community based on these rather limited survey findings, there seems to be a general consensus in expanding the definition of IF into a more inclusive framework. That seems to indicate that the voices in opposition to opening up the field of IF represent a vocal yet minority position. But why is are the voices of change so strong now?

On her Interactive Storytelling blog, Emily Short addresses the question of accessibility in entry “So, Do We Need This Parser Thing Anyway?” In part, Emily writes:

“The other problem is the parser. When you look at novice reactions to IF — found in responses to IF games posted on indie gaming sites, or in student reactions to playing IF for the first time — the initial reaction is often enraged frustration with the parser. The first few (or few dozen) moves of a new player’s interaction with the game often consists of many many failed attempts that do not move the game forward in any way.”

the parser as interface of barrier?

The parser—the interface that continues to delight many IF enthusiasts who have been playing since the days of the Colossal Cave Adventure—is undeniably a stumbling block for gamers that have grown up in a universe of sophisticated game interfaces that rely on a wide variety of input mechanisms: keyboard, touchscreen, mouse/joystick, audio, and camera-tracked player motion. How does text “compete,” and why should we even expect it to?

At the Game Developers’ Conference in San Francisco in 2013, independent developer Mordechia Buckman presented a moderated poster session titled “Interactive Fiction: Traditions vs. Potential” talks about the interface challenge. Core to his presentation was the concept that the traditional IF game interface, whether completely text-based or text-based with supplementary media elements included, was inflexible to the point of diminishing the game experience, based on the context of the player in the game. His simple argument was that the actual IF game interface should change based on where the player was in the game, what the player was doing, and so on. A creature combat sequence might have an entirely different layout and set of available tools than would a puzzle-solving sequence. Developing a “mixed-methods” interface, though, isn’t something easily accomplished through the existing IF development tools that are out there, such as Inform 7 for parser-based IF or inklewriter for CYOA IF. 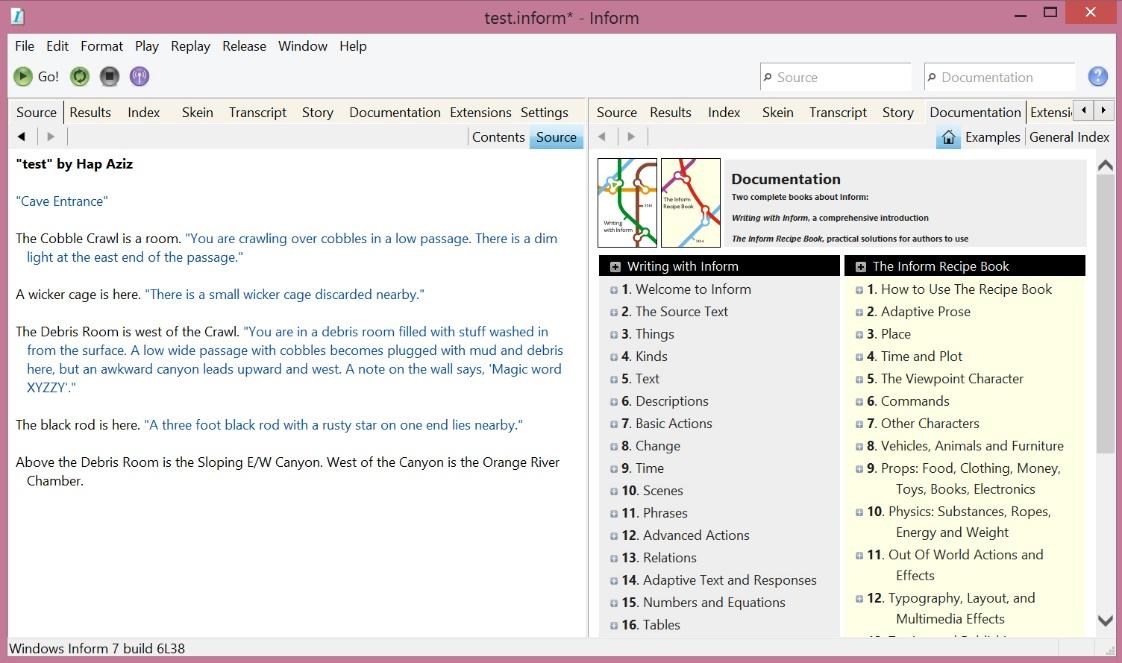 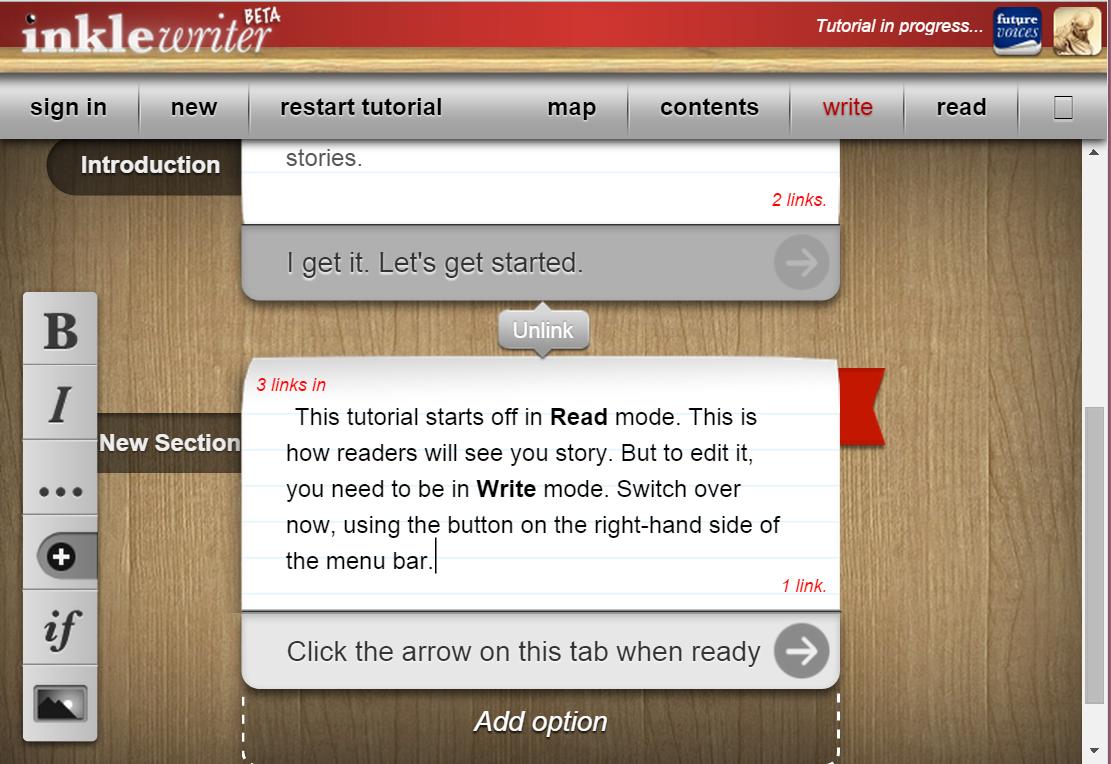 Less complex to implement yet still providing additional support to the novice IF player is the idea of an enhanced parser interface with some basic command buttons and a better help system. In this format, the player may use the old-school parser, yet there would be visual command functionality allowing the player to use more familiar input methods. That could even turn into a more robust CYOA format should the basic IF approach turn out to be too difficult. This CYOA format could also come up on demand at the click of a Help button onscreen. The image below depicts this kind of enhanced parser interface from a game I am currently developing. 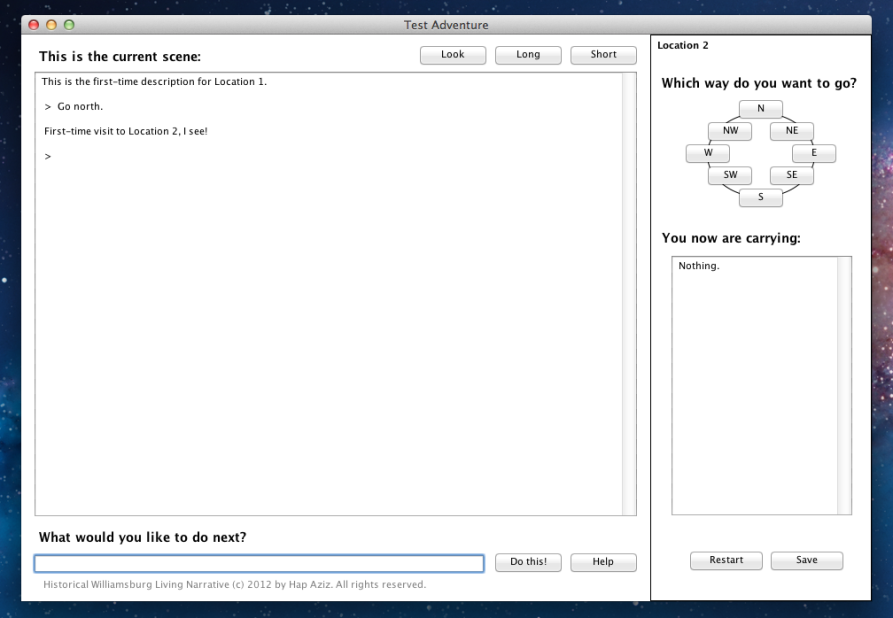 The parser heritage is evident with the large field for text output and the text input field at the bottom of the screen. The addition of the command buttons for simple actions (including navigation) gives the modern game player a measure of comfort, since the button commands can help in the exploration process. The Help button can lead to more controlled interactions.

choose your own experience

The question of parser versus CYOA Interactive Fiction may be decided in the marketplace, and it is important to understand that the IF is not a “zero-sum” genre. Over the past few years we have seen a steady increase in the CYOA game format being represented in the annual IF Comps, for example. Unfortunately, the rise of representation is also accompanied by a rise in declarations of the death of parser IF or the lack of relevancy of CYOA IF. You only need to browse some of the discussion forums (for example) to see some of the colorful exchanges between factions. Or follow #interactivefiction in Twitter to read the comments going back and forth.

It’s my belief that the market is large enough to support a broader definition of IF, but a side effect of the debate will be a “thinning of the herd” so to speak. For parser-based IF to remain a viable game format, the widely available titles need to be top-notch examples or risk quick dismissal by the new generations of game players. Yes, the growth of mobile devices is a tremendous opportunity for parser-based IF, but people will sour if too many of the games they encounter are exercises in frustration and non-engagement. And the sad truth is that parser-based IF is most susceptible to these design flaws.

Ultimately, the great joy of parser-based IF is the open-ended nature of the interaction, and the almost conversationally engaging quality of a well-developed parser. Many players that enjoy rich parser-based IF have had the experience of falling into a world of questions and explorations, with the illusion of working through the game alongside an intelligent entity. There’s no reason to believe that CYOA IF will cause any decline in the traditional Interactive Fiction audience. In fact, as new generations of computer gamers discover the joys of choosing their own paths while they play, it’s quite likely they’ll want to experience the great selection of paths that parser-based Interactive Fiction can offer.